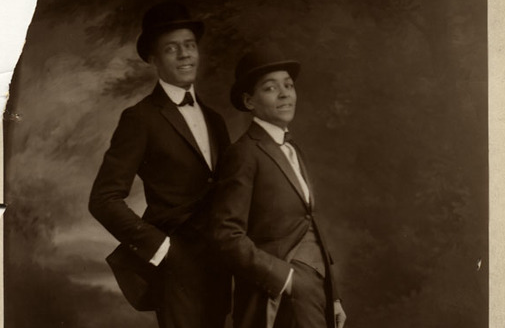 Idroma Montgomery (she/they) graduated with honours from Arcadia University in Philadelphia, with a BA in Sociology and a minor in African American Studies. They hold an MA in Culture, Globalisation and the City from Goldsmiths, University of London. They are currently an MPhil/PhD student in Gender and Sexuality in History, Classics and Archaeology at Birkbeck, University of London.

My PhD project explores queer black women in Harlem and London and their connection to other American and British cities during the interwar period.

Focussing on entertainers, I aim to reveal the intersections of black/queer life in Harlem and London, the importance of Harlem and the Harlem Renaissance in queer and black communities in Britain during this period, the intranational and international migration of black communities, and how these communities imagined Europe and the new possibilities available for diasporic black populations.

The main goal of my project is to shed light on interwar black women, an overlooked population during this period, and their relationships to queerness. Most available research has focussed on white queer communities or black communities who resided and worked in London in the pre-Windrush era. Even within the research emerging for black queer history in both America and Britain, men are the focus, with black women remaining a footnote. I want my project to be an addition to the larger conversation around intersections of race, gender and sexuality in the interwar period, and to show the importance of these women when discussing modern, cosmopolitan blackness and queerness.

There have been many challenges with this project, including the fact that I began my project during the pandemic, which necessitated new ways of uncovering information while still in lockdown. It would have been impossible to discover as much as I have without the use of various digital sources. Many discoveries were made using sites such as the British Newspaper Archive, The Heritage and Cultural Exchange Archive, British Pathe, and genealogical websites, which provided census information, arrests and trials, nightclub footage of black entertainment, and details of entertainers’ origins and career trajectories on a local and national scale.

“Even though these women achieved success and respect in their lifetimes, their popularity, and the spaces that they occupied tended towards the ephemeral.”

Working digitally has allowed me to find information that would have otherwise remained hidden from view. Another major challenge, which has also been helped by digital research, is the scarcity of information from the women themselves, such as diaries and interviews, as well as information about the women from media and their contemporaries. Even though these women achieved success and respect in their lifetimes, their popularity, and the spaces that they occupied tended towards the ephemeral. Much of the information that may have existed about them has been lost, forgotten, or wilfully left unrecorded (such as direct evidence of queerness and gender non-conformity). Due to this, parts of their lives will, for the time being, remain out of reach, though I hope that in the future I will be able to locate even more information about these fascinating women.

My biggest hope for my project is that it makes these women and the environments that they existed in accessible for both an academic and public audience. From the start of my project, I wanted to add a digital component that would allow a varied audience to understand the breadth of London and Harlem’s black and queer nightlife, and how frequently they intersected. I also wanted to provide a larger context of other political and artistic movements happening in these areas, highlighting and interrogating the ongoing regulations and restrictions that these communities faced.

My early attempts at creating a map simply did not allow for the level of categorisation and inclusion of media that I wanted. Volunteering with Humap allowed me to create my ideal map, one that is interactive, customisable, and intuitive to both the creator and the user. I have spent many hours tinkering with my map, adding new details as I find them, while also working on interesting features such as the interactive trails, which allows users to explore Harlem and London in real-time while learning about these historical sites. I plan on using my map as a key part of my project and continuing to add information about the women that I am researching. The Humap team have been fantastic and incredibly supportive, making the learning process simple and painless. I have already recommended Humap to other students and colleagues, and I look forward to expanding my map as my project continues.